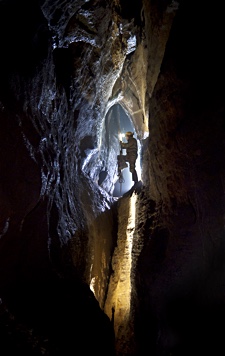 From the Blackamoor catchment area at the head of Velvet Bottom a sizeable stream sinks in the valley floor to feed the Cheddar Risings, 210m lower and some 5km away to the south-west.

Of the small group of Blackamoor caves, Upper Flood Swallet is by far the longest. Whereas most of the cave known before 2006 consists of passages of modest cross-section, the main streamway passage discovered in that year is up to 20m high for much of its 500m length. An extensive network of roomy, dry passages has also been explored, including a number of large chambers. Unusually for Mendip, much of the cave descends at a shallow angle of 5°, and it is geologically interesting since it mainly developed within the Lower Limestone Shales, although sections beyond Royal Icing function are in Black Rock Limestone. The formations in Neverland are some of the finest to be found under Mendip.

WARNING: Note that a trip into the 2006 extensions involves traversing an extensive boulder choke which may be unstable and liable to movement. Cavers must take extreme care in this section, and understand that they pass the choke entirely at their own risk. A rescue dump is maintained in the Departure Lounge immediately beyond the choke. Currently, there is extremely limited access to Neverland and the passages beyond due to the density and fragility of formations.