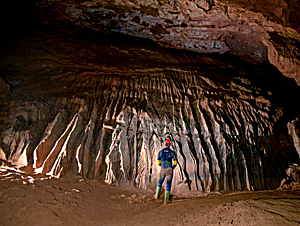 Long renowned as a show cave, Wookey Hole has been the scene of many notable 'firsts' in British cave diving history and still offers considerable scope for upstream exploration. The show cave section is a series of interconnected grottoes and chambers with a number of high-level extensions.

The tourist route runs for 150m northwards into the hillside and follows a parallel course to the river passage, sloping gently to water level at the Third Chamber. Here the river passage turns east to continue upstream along 245m of mostly submerged passage, with the tourists following overhead along a blasted tunnel until the large Ninth Chamber, now termed Cathedral Chamber, is reached. This was the limit of the show cave, but was extended through a blasted tunnel to the impressive chamber 20 (previously only accessible to divers).

A tunnel provides a round trip for the public back to the ravine, emerging on the east side of the River Axe. Upstream is for divers only, and a series of deep sumps continues eastwards and then northwards, interspersed with significant lengths of did passage including the impressive chamber of Wookey 20 and the spectacular streamway of Wookey 24 with its very large high-level galleries. From Wookey 25, the route upstream plunges deeply and is entirely underwater. The furthest point reached is at a depth of 90m (26m below sea level) and 1km north-east of the cave entrance. The Wookey Hole catchment area includes the major caves of Eastwater Cavern, St. Cuthbert's Swallet and Swildon's Hole amongst many other active feeders in the Priddy area 3 km to the north.