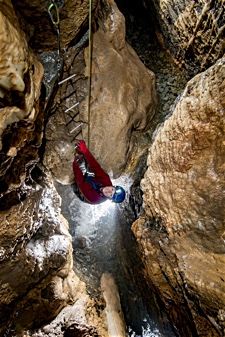 Swildon's Hole is the longest and most popular cave on Mendip, offering a wide variety of trips from the easy yet inspiring Upper Series for the novice, to strenuous and challenging undertakings for the seasoned caver.

The core of the system is a fine active streamway about 1500m in length, divided by sumps into twelve sections and leading to the present termination of the explored cave at Sump XII. The stream resurges at Wookey Hole over three kilometres to the south and 174m below the cave entrance. Accessible from the main stream is an extensive high-level network of fossil passages, which provide links within the system. Non-divers can access the cave as far as Sump IV, via Blue Pencil Passage. Swildon's Nine, an excellent trip, can be reached by free-divers and Swildon's Ten to Twelve by cave divers only.

Using a combination of the high-level network and the active streamway, three classic round trips and a through trip are possible:

WARNING: The Watergate Connection and the Long Round Trip can only be done in one direction, owing to the need to bail sumps.