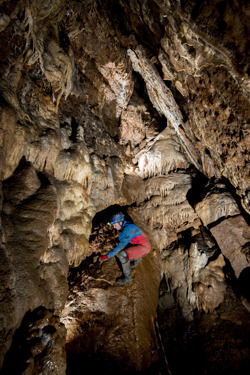 The initial section of this cave offers very little technical difficult or discomfort and makes a modesty interesting trip suited to beginners.

The cave forms a substantial inlet into the Hillier's Cave streamway, which itself is part of a wider complex drainage pattern feeding St. Dunstan's Well resurgence, a little to the north-east of the Quarry. Although much of the once-profuse decoration has been destroyed, enough remains to be attractive.

WARNING: Be aware that due to run-off from the quarry floor the excavated crawl near the entrance of Hillier's Cave can sump very quickly. It is possible to become trapped in Hillier's streamway.

The original entrance to this cave (now blocked), pre-dates the quarry, and was marked on old maps as Fairy Rocks. It was visited by the monks of Downside Abbey at the turn of the 20th century and they sometimes referred to it as Cox's Hole. Potsherds were said to have been excavated from the original entrance in 1888 and Iron Age pottery was found in 1929. Legend holds that a bagpiper once disappeared inside this cave. Although he was heard playing below the ground several days later, he was never seen again.