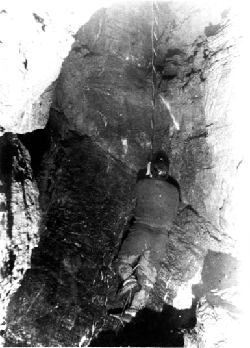 Eastwater Cavern has often been described as a true 'caver’s cave', and as an introduction to the typically steeply inclined passages of Mendip, it is hard to beat.

A descent through boulders yields a series of low 45 - 60º inclined bedding planes and deep shafts, resulting in a very limited amount of walking passage and few chambers of note. The caving is relatively arduous and sporting in nature, and with few formations to be seen, an awe-inspiring gloom adds an oppressive element to the fun. The remote lower passages are rightly regarded as being among the hardest on Mendip. The stream resurges at Wookey Hole nearly 4km to the south and 180m below the cave entrance.

Three classic round trips are possible: