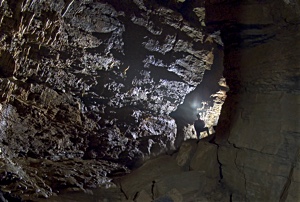 Until 2008 Charterhouse Cave was completely overshadowed by its much larger and more celebrated neighbour, G.B. Cave, but in that year the terminal boulder choke in the smaller cave was passed after a dig lasting 26 years, and the passages explored over the next three years exceeded all expectations.

Not only did the G.B. water join the Charterhouse Cave streamway from an impenetrable boulder buckle to flow on to a sump at a new record Mendip depth, but a bypass was soon found which led into a vast network of fossil passages extending southwards to within a few hundred metres of the top end of Cheddar Gorge. The middle reaches of the system have a very shallow gradient but diving in a static sump at the far end has taken the depth of the cave to 228m, making it currently the 5th deepest cave in Great Britain.

WARNING: Portal Pool, Diesel Duck and sections of Route 66 are pumped during the winter months and during some wet springs and summers. CO2 can also be a problem in the lower reaches.