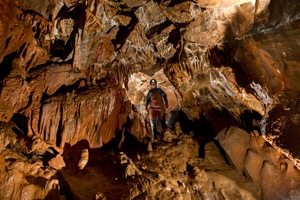 Hillier's Cave represents a downstream continuation of the main streamway of Withyhill Cave and forms part of the complex drainage pattern which feeds St. Dunstan's Well resurgence to the north-east of the quarry.

Much of the cave is very muddy and several boulder chokes command respect. Nevertheless, it remains very well decorated in parts and care should be taken not to damage the formations, particularly in the section downstream of the link with Fairy Cave.

WARNING: Neither the connection upstream with Hillwithy Cave nor the section downstream of the link with Fairy Cave should be considered suitable for novices. If attempting the through trip to Fairy Cave please note that the recently dug out crawl near the entrance of Hillier's has been seen to sump very quickly due to the run-off from the quarry floor, and since the squeeze that links the two caves is tight it is possible to become trapped in Hillier's streamway. The connection with Hillwithy Cave is frequently blocked with quarry sludge and is only feasible in the very driest of conditions.